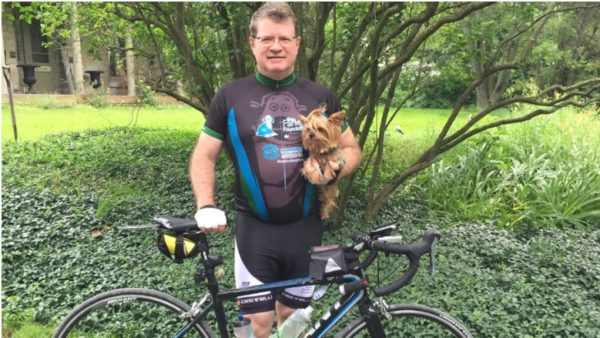 Bob Simpson is hoping his cycling progression of recent years holds up.

Simpson is once again participating in the ‘Ride for Farley’ later this year, a cycling race that raises money for the Farley Foundation, which provides pet owners in need of financial support to help pay for veterinary services. Each year, Simpson has taken an increasingly ambitious approach to the event: in his first year, he participated in the 50-kilometre loop; last year, he participated in the 100km loop; this year, he’ll be riding in the 160km loop.

Simpson, a Stone Mills resident, is the CEO of the Veterinary Equipment Exchange Network and Canmedical; both companies help supply veterinary hospitals and offices.

Simpson’s cycling push started about four years ago after a visit to the doctor’s office. “I was 53, and they told me I had the fitness level of a 69-year-old man,” he said. “I thought I better do something about it.”

At around same time, he took note of the Ride for Farley, something he’d heard about in veterinary circles. So, he began slowly training for the race, increasing his ride lengths. After completing the 50km race in his first year, he aimed for 100km in the next.

Last year, he rode farther than he had to — though he did so unwittingly. “I actually took a wrong turn and ended up doing 127km,” he said. “I still ended up as the third rider (across the finish line) after going 27km out of the way. I figured if I could do 127km and live to tell the story and ride home after that, I think I can do 160.”

He said he’s already training for the Sept. 23 race, which starts at the Ontario Veterinary Medical Association headquarters in Milton. “This winter, I put on a little extra ‘chunkage’. I’m working my way down now. I’ve done a 60km ride with no trouble at all, and I’m pretty comfortable that I can do the 160,” he said.

He said his personal fundraising target for the race is $10,000. For each of the last two races, Simpson has raised around $5,000.

Simpson says the charity is an easy one to get behind. “Basically, the funds are distributed by veterinarians; each veterinary clinic has an allotment every year of $1,000 that they can draw from for qualified pet owners,” he said. “The thing that kind of touches my heart on this whole thing is, I know people and know of people, their dog or their cat is their life. They have no family, they have few friends and this is their life. They get up in the morning and their dog or cat keeps them company. A lot of these people have little or no money… this helps people look after the welfare of their animals.”

The Farley Foundation gets its name from the canine character from the For Better or Worse comic strip.

Simpson said he has just started his fundraising drive, and he’ll be collecting money throughout the summer in advance of the race. To make a donation, visit www.canadahelps.org/en/pages/riding-160km-to-raise-funds-for-the-farley-foundat/.